Marin lacks a comprehensive plan for how communities will adapt to climate change impacts, the civil grand jury concluded in a new report.

In its report, titled “Climate Change: How Will Marin Adapt?,” the grand jury says local governments have done “outstanding work on climate change,” especially in reducing greenhouse gas emissions and identifying sea-level rise vulnerability. However, the county lacks a centralized strategy to prevent the causes of and adapt to climate change impacts such as rising sea levels, stressors to public health and socioeconomic changes, the report said.

“Most of Marin’s municipalities do not yet know how to approach this difficult task,” the report states. “The adaptation planning process needs a reboot.”

To change this, the grand jury recommends a “Marin climate adaptation task force” be formed to draft a strategy that covers the entire county. The panel would include local government officials from all cities and the county, other agencies and representatives from underserved communities.

“By committing to a more collaborative approach, Marin will be better prepared for the difficult climate change challenges that lie ahead,” the report states. “The cost of addressing climate change could be enormous. The cost of doing it haphazardly could be even greater.”

The report, released on Sept. 11, also recommends the creation of the new county “office of sustainability and resilience” to implement and secure funding to both prevent climate change impacts and adapt to them. The new office would be staffed by existing and new employees working on climate change.

The office would also oversee securing grant funding, which the grand jury argues will be more effective with a countywide strategy in place.

The grand jury calls on the county, Marin’s 11 cities and towns, the Marin Municipal Water District, MCE, the Marin General Services Authority and the Transportation Authority of Marin to respond within 90 days.

“Despite some early successes, like reducing emissions to 20 percent below 1990 levels by 2012 (eight years ahead of schedule), there is much work to do,” Hymel wrote in a statement. 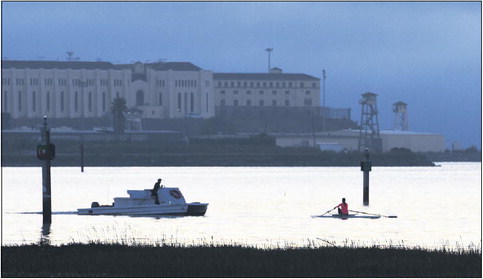 The Marin County Civil Grand Jury is urging the creation of a countywide “climate adaptation task force” to address rising seas and other threats. Above, a rower and a coach boat off the Marin shore near San Quentin State Prison on Tuesday. 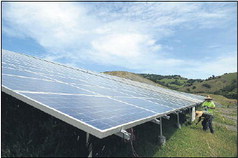 The solar farm at the Cooley Quarry in Novato supplies electricity to MCE, formerly known as Marin Clean Energy.

“We have worked hard with our cities, towns, and many other partners to develop an integrated approach toward climate change planning, adaptation and mitigation.”

The grand jury states the new sustainability office would address “shortcomings” it found in the county’s existing climate strategy.

The county does have staff in its Community Development and Public Works departments working on sea-level rise adaptation, but many of them are dependent on grant funding that will expire in the next year, the grand jury states.

“As a consequence of the COVID-19 pandemic, funding for these positions may have become even more precarious,” the report states.

A model that Marin could use is San Mateo’s Office of Sustainability, formed in 2014, the report states.

“What the Marin County government needs is an overarching leadership structure that would coordinate the climate-related efforts not only in the Department of Public Works and the Community Development Agency, but also in Health and Human Services, Parks, Agriculture, and all other departments affected by climate change,” the report states.

The departments also don’t have the authority to direct climate change mitigation efforts, but rather rely more on informal collaboration, the report states.

The Health and Human Services Department does not have a position focused full-time on the health risks of climate change, the grand jury states, such as warmer temperatures, air pollution, natural disasters that could release hazardous materials, marine toxins and more vector-borne disease, the report states.

In addition to the new office, the grand jury recommends an expansion of the Marin Climate and Energy Partnership and Marin Flood Control and Water Conservation District to oversee countywide greenhouse gas reduction and sea-level rise adaptation.

Douglas Mundo, executive director of the Multicultural Center of Marin and co-director of Shore Up Marin, supports a centralized approach and funding strategy. The Canal neighborhood in San Rafael, where the center is based, already faces flooding issues that would become worse through the century unless defenses are in place.

Mundo said climate change must be recognized as a human issue that is putting communities across the state at risk.

“The county and, in fact, all of the jurisdictions need to come together and support Drawdown Marin, which has been happening for the last two years in implementing its goals of climate resilience but also of reaching zero net greenhouse gas emissions by 2045,” Carney said.

Including input from both the public and private sector is critical to successfully addressing climate change, Carney said.

However, Mundo said he also recognizes that various communities have their own priorities and that a centralized funding source could lead to disagreements. Mundo argues the funding should be immediately invested in defenses for communities, housing and businesses at risk of being inundated by sea level rise.

“We won’t be able to please everybody,” Mundo said. “We still have people that don’t believe in climate change and sea-level rise and we need to work with them as well.”

A copy of the grand jury report can be found online at bit.ly/33TEsfx 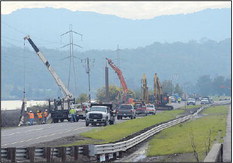 Crews perform emergency construction on a wall along Highway 37in Novato in the aftermath of severe flooding in 2017.

Click here to see this page in the eEdition: