Common red flag in gunmen is anger toward women

The man who shot nine people to death last weekend in Dayton, Ohio, seethed at female classmates and threatened them with violence.

The man who massacred 49 people in an Orlando nightclub in 2016 beat his wife while she was pregnant, she told authorities.

The man who killed 26 people in a church in Sutherland Springs, Texas, in 2017 had been convicted of domestic violence. His ex-wife said he once told her that he could bury her body where no one would ever find it.

The motivations of men who commit mass shootings are often muddled, complex or unknown. But one common thread that connects many of them — other than access to powerful firearms — is a history of hating women, assaulting wives, girlfriends and female family members, or sharing misogynistic views online, researchers say.

As the nation grapples with last weekend’s mass shootings and debates new red-flag laws and tighter background checks, some gun control advocates say the role of misogyny in these attacks should be considered in efforts to prevent them.

The fact that mass shootings are almost exclusively perpetrated by men is “missing from the national conversation,” said Gov. Gavin Newsom of California on Monday. “Why does it have to be, why is it men, dominantly, always?”

While a possible motive for the gunman who killed 22 people in El Paso, Texas, has emerged — he posted a racist manifesto online saying the attack was in response to a “Hispanic invasion of Texas” — the authorities are still trying to determine what drove Connor Betts, 24, to murder nine people in Dayton, including his own sister.

Investigators are looking closely at his history of antagonism and threats toward women, and whether they may have played a role in the attacks.

Shannon Watts, the founder of Moms Demand Action for Gun Sense in America, cited a statistic that belies the sense that mass shootings are usually random: In more than half of all mass shootings in the United States from 2009 to 2017, an intimate partner or family member of the perpetrator was among the victims.

(The study, by the gun control advocacy group Everytown for Gun Safety, defined mass shootings as those in which four or more people died, not including the gunman.) “Most mass shootings are rooted in domestic violence,” Watts said. “Most mass shooters have a history of domestic or family violence in their background. It’s an important red flag.”

Federal law prohibits people convicted of certain domestic violence crimes, and some abusers who are subject to protective orders, from buying or owning guns. But there are many loopholes, and women in relationships who are not married to, do not live with, or have children with their abusers receive no protection. Federal law also does not provide a mechanism for actually removing guns from abusers, and only some states have enacted such procedures.

Judges can consider an individual’s history of domestic abuse, for example, under red-flag laws adopted in at least 17 states. Such laws allow courts to issue a special type of protective order under which the police can take guns, temporarily, from people deemed dangerous.

The National Rifle Association, the nation’s largest gun lobby, has opposed efforts to expand the situations in which individuals accused of abuse can lose the right to own guns, saying that doing so would deny people due process and punish people for behavior that is not violent.

But Allison Anderman, senior counsel at Giffords Law Center to Prevent Gun Violence, said measures that facilitate the removal of guns from abusers “are a critical step in saving the lives of abuse survivors.” And given the link between domestic abuse and mass shootings, she said, these laws may also help prevent massacres.

In a case that highlights the so-called boyfriend loophole, in 2016, a man who had been convicted of stalking a girlfriend and had been arrested on a charge of battery against a household member shot Cheryl Mascareñas, whom he had briefly dated, and her three children, killing the children. Because the man had not been married to or had children with the woman he was convicted of stalking, his conviction did not prevent him from having or purchasing guns.

A professed hatred of women is frequent among suspects in the long history of mass shootings in America.

There was the massacre in 1991, when a man walked into Luby’s Cafeteria in Killeen, Texas, and fatally shot 22 people in what at the time was the worst mass shooting in modern U.S. history. The gunman had recently written a letter to his neighbors calling women in the area “vipers,” and eyewitnesses said he had passed over men in the cafeteria to shoot women at point blank range.

“Even some of the incidents that people don’t know about or aren’t really familiar with now or don’t come to mind, there definitely is a thread of this anger, and misogyny,” said James M. Silver, a professor of criminal justice at Worcester State University who has worked with the FBI to study the motivations of mass gunmen.

As the nation grapples with last weekend’s mass shootings and debates new red-flag laws and tighter background checks, some gun control advocates say the role of misogyny in these attacks should be considered in efforts to prevent them. 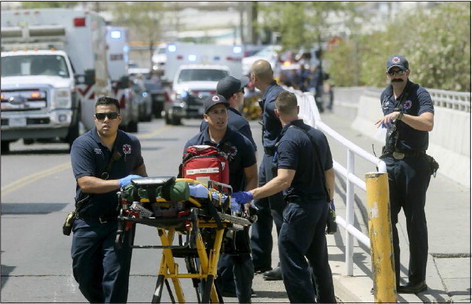 El Paso Fire Medical personnel arrive at the scene of the Aug. 3 shooting at a Walmart in El Paso, Texas.

Click here to see this page in the eEdition: